If you’re old like me…(over 40) :), you will remember that famous intro as Johnny Carson was being introduced on “The Tonight Show.”

It seems so familiar but the only way I was able to hear this opening was if I was staying up late on a school night. Johnny Carson retired in 1992…and the show didn’t start until 11:30pm, which meant that I was 14 or under…and up way past bedtime.

As Canada Day weekend is upon us, I had the realization that I went an entire month without saying anything to all 4 of the people who read this blog.

Since it’s been so long, here’s a recap of what’s new…so, here’s Jonny.

A few months ago I hurt my knee doing some DDPY exercises and it freaked me out somewhat. I’ve got one good leg and one bad leg and it was my good knee that was affected. It HURT.  I was unable to walk and to leave the house for a couple of days. It was a sobering reminder of how fragile our bodies are, especially for an old guy like me. Joy keeps “encouraging” me to start it back up again but I’m a little gunshy.

But, all is not lost. I have continued to lose weight. Not as fast as I would like – but still on the downward trend. I started the journey at 242, lost some weight, bought a new scale and went backwards 2 pounds – and now I’m at 219. So, by my math, accounting for the 2lb variance in scales, I’ve lost 25lbs. Not a tremendous amount, but enough that my pants and shorts will fall down on their own if I don’t hold them up.

I could successfully join that interesting group of young men who insist on wearing pants far too big, exposing their underwear and making it difficult to walk. Instead, I have been re-introduced to a belt, which I have not worn in years!

Well, it’s Crocs season and I like them. What can I say?

I recognize that they may have gone out of style a while ago, BUT, in my defence, the company still does over $1 billion in sales, so…someone is wearing them. At roughly $50 a pair average that’s 20 million stylish people, other than myself 🙂

They aren’t great for mobility since they provide zero support and I can’t wear my brace, but boy do they look good.

Joy often teases me about my camo Crocs, but something exciting happened just last week. I wore them to church and as I was sitting in the hallway waiting for Joy, a guy walked by and said “nice shoes” – I looked down and he was wearing the exact same camo Crocs. What can I say – 2 guys that clearly know something about style… 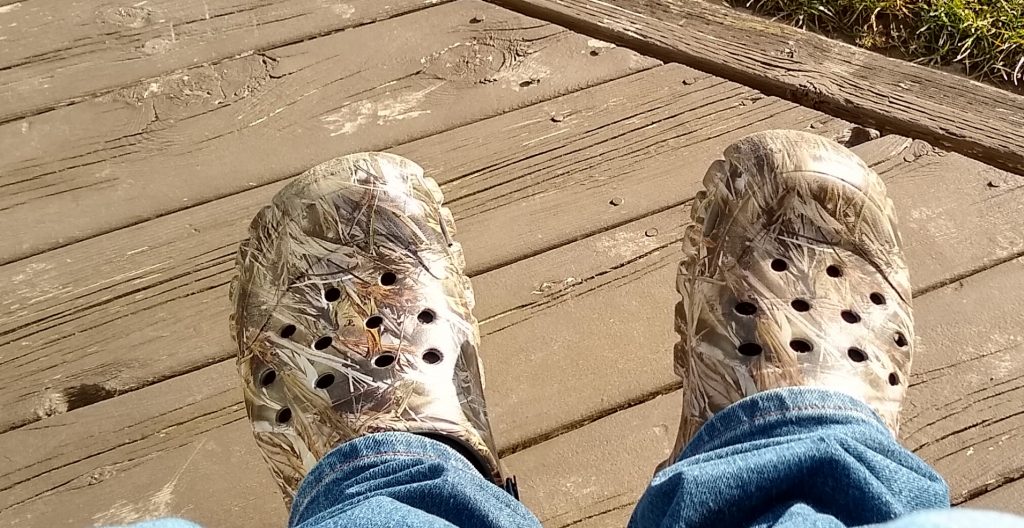 And, I picked up this shirt while on vacation (more on that below so keep reading.) I don’t feel that Joy truly appreciates this shirt, just about as much as she doesn’t appreciate my Crocs. I saw it for $9 at Old Navy in Charleston, South Carolina and it was just calling my name. Maybe it’s a little outside my normal “look” but, I like it. 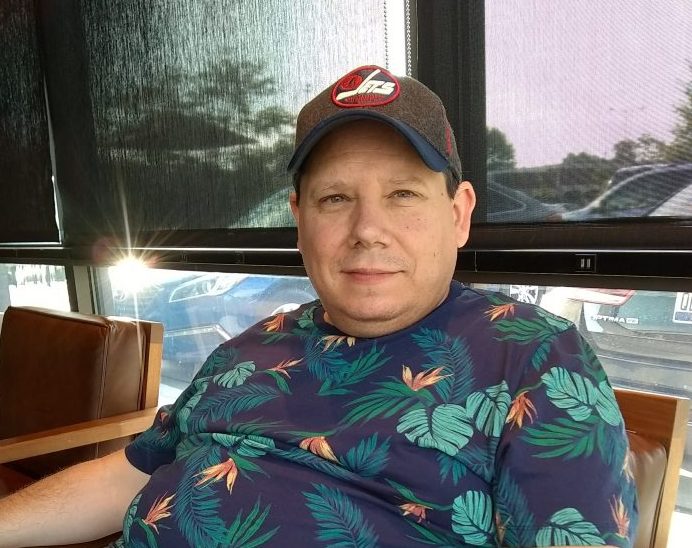 I mentioned in a previous blog post about my frustration with needing to use a wheelchair, and being stuck with what I call “the old lady wheelchair”  (a simple stainless steel chair that belongs in a nursing home or hospital). It’s not meant to go outdoors which is where I would likely use it most.

Anyway – it turns out that previously, I was given incorrect information when I inquired about getting a better wheelchair. Originally I was told that because I wasn’t going to use it 24-7, I did not qualify for any funding through the Assistive Devices Program.

I was bothered and discouraged by that answer, so one day I decided to fire off an email to the Premier of Ontario, Doug Ford. My local MPP is pretty much useless as I’ve contacted her a few times before with no answer whatsoever, so I went to the top. (This is not an endorsement of Doug Ford, just my own experience of what happened.)

Say what you want about the guy, but within a couple of days, I got a helpful response from Doug Ford’s office. The response was that they would forward my email over to the office of Christine Elliott, the Minister of Health for Ontario. From there, a few days later, I got an email and a voicemail from a program director at the Assistive Devices Program. We arranged for a phone call and he clarified the information. He was helpful and he gave me info on the next steps.

It turns out that the wording on their own website and their documentation isn’t quite as clear as it should be…and in some places, it’s actually entirely incorrect.

Here in London, we have waitlists for pretty much everything health-related and that includes getting fitted for a wheelchair. Apparently, the waitlist for that is something like 1.5 years at Parkwood Hospital, so I decided to find an Occupational Therapist that could do a private assessment, rather than waiting for the program at the hospital to get in touch with me.

Fast forward and now I’m in discussions with the OT and a mobility equipment store here in London to get what I need.

These things are not cheap! As with any government program, they will pay for certain things and they won’t pay for others. For what I’m looking for, a wheelchair is going to be anywhere from $5000 at the low end, to over $7000. ADP will pay a portion of that, which is “technically” 75%, but only 75% of what they deem necessary, so it’s likely more like 50% when it’s all said and done, and then we will have to pay the other half.

But, at least we’re moving in the right direction. I’m looking forward to being able to propel myself through a store or go to an outdoor event in a wheelchair that’s equipped for how I need it to work. Currently, I do a lot of sitting and waiting while Joy goes somewhere or does something that’s just outside my ability level.

Below is a picture of one of the models I’m looking at. Mine will look slightly different, based on the options I’m getting or not getting vs. what’s in the picture. 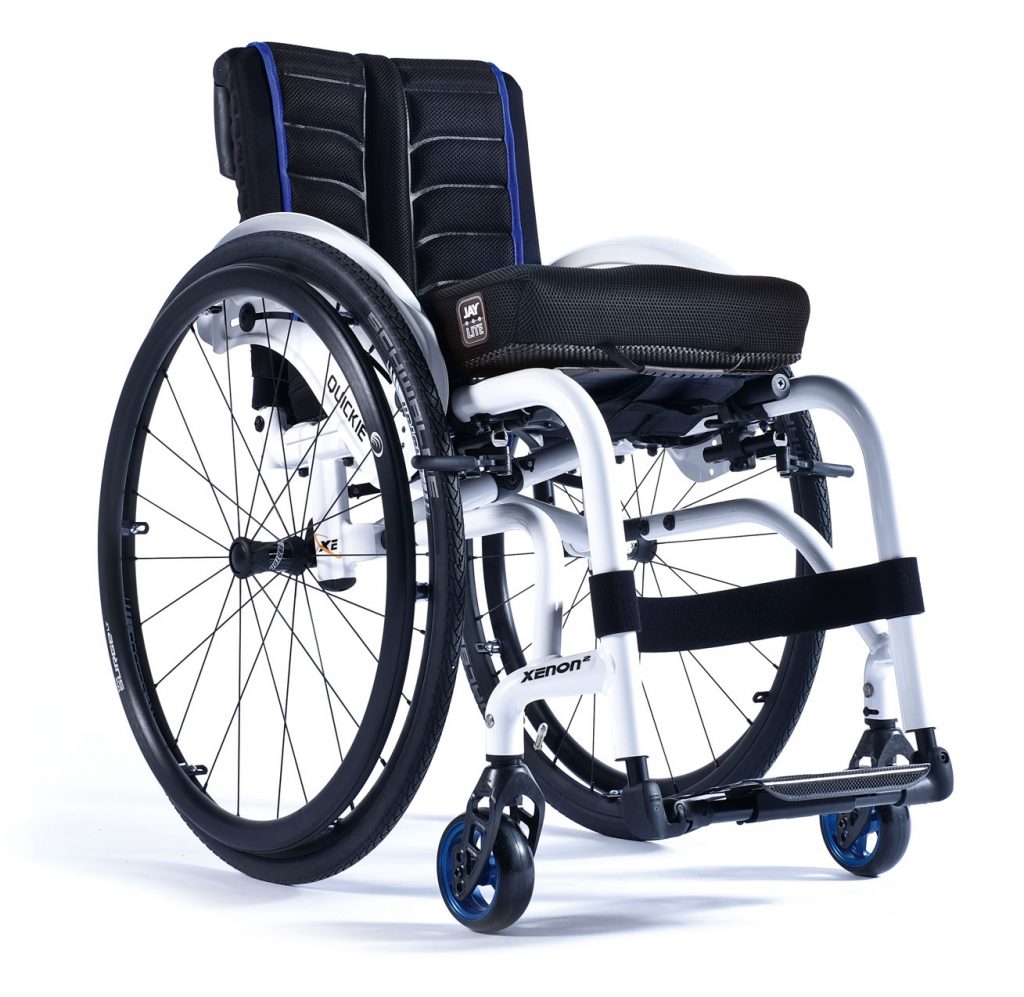 Each year around our anniversary, we like to go away somewhere. We’ve been a lot of places over the years throughout Canada and the USA and we’ve got a list of places we would still like to go, based on the budget required to get there. This was one of those vacations that we were not prepared to spend a fortune – but we wanted to see the sights and hear the sounds of a different location, other than London.

4 or 5 years ago when we were in Myrtle Beach, South Carolina, we took a drive on one rainy day and ended up in Charleston. It was a dreary day and we hadn’t really prepared for our visit, so it turned out to be lame. We found a nice spot for coffee, drove around a little and promised ourselves we would return someday.

When planning the trip to Charleston, we didn’t think that a 15+ hour drive just to go to Charleston was going to be worth it, so we included Savannah, Georgia in the trip as well since they are only a couple of hours apart.

We left early on a Friday morning and made our way to another interesting little city that we’ve been through a few times. Charleston, West Virginia. We’ve stayed there a few times before as we were passing through, so we booked a hotel there on the first night of our journey since it’s about half-way between London and our destination.

The next morning we drove to Savannah, where we stayed 4 nights and then on to Charleston for 3 more nights.

It was HOT when we were there – 37 degrees Celcius some days.

I felt bad for Joy, having to push my old lady wheelchair through the streets of Savannah and Charleston. Both have old, uneven sidewalks made of cobblestone and brick. It was a frustrating and bumpy ride most days, but we made it!

Some of the sights that we saw on our walking tour of Charleston, using an app on our phones were sobering reminders of the area’s troubling history. For example, we walked past the Old Slave Mart which served as an auction facility for buying and selling slaves until about 1865.

This was such a popular trading post for slaves that the tour narrator pointed out that many African American’s and African Canadian’s can trace their roots through that auction.

When I’m in the USA, I’m always struck by the varying levels of wealth and poverty within close proximity to one another and even today, there is an economic divide that’s hard not to notice.

In Canada we have wealth and we have poverty, just like everywhere – but it seems very pronounced in the US. There are people living in absolutely horrible conditions, while a few miles down the street, incredible wealth. It’s hard to believe for such a prosperous country.

Joy and I have lived in one of the “poorer” neighbourhoods in London for a short time and this neighbourhood looks great compared to some of the slums that you might see down that way, or in many small towns on our drive.

Of course, being down south, we got to see the finest displays of American patriotism…and some other nonsense.

God is everywhere and yet nowhere all at the same time. I know that’s a cryptic way of explaining what I saw – it’s a different place. To avoid offending anyone, I will leave it at that. 🙂

It’s a great reminder on Canada Day weekend that Canada is an amazing place to live. Of course, we all complain about the state of affairs here, but overall, we have an amazing country to call home.

If you’re reading this, you likely have food on the table – enough for today and tomorrow, you have access to the healthcare that you need, you’ve had a decent education if you wanted it and you make more than $7 per hour.

I took a lot of photos while we were in both Savannah and Charleston, but I’m not exactly a good photographer. Many pictures leave me thinking “why did I take a picture of that?”

(Use the arrows when hovering on a picture to go through the gallery below.)