Spoiler Alert: The good part is near the bottom, although…the whole post is interesting. This is a 4 Part Series – click here to read the 1st in the series

From a very young age, I was a car guy. My Dad and I spent many hours, driving around car dealerships looking at new and used cars. I had an affinity for learning as much as I could about each car: Options, prices, trim level, engine size, colours available and so on.

After a foot surgery in 1992, I took things to a whole new level with my car obsession.

I had a cast on my leg for about 3 months, was able to skip school for the entire time (I had a tutor) and after that, I wasn’t mobile for a while without help, so I had time to read.

It was during one of my many long days on the couch that my parents bought me a 1992 New Car Guide. I still remember it – it had a grey cover, which eventually fell off due to overuse.

The book had every car available for sale in Canada and the USA in 1992, including the pros and cons, options, trim levels, technical specs and what changed for that particular model year.

I remember telling my tutor (who happened to be my Grade 1 teacher) that her brand new car appeared on the “Do NOT buy list.” I’m sure she appreciated that. 1992 Eagle Premier. Not a particularly nice-looking car. 🙂

My car of choice at that time was the 1992 Jaguar XJ220. This was the fastest street-legal car ever produced at the time. I was obsessed with this car and they still look cool today. 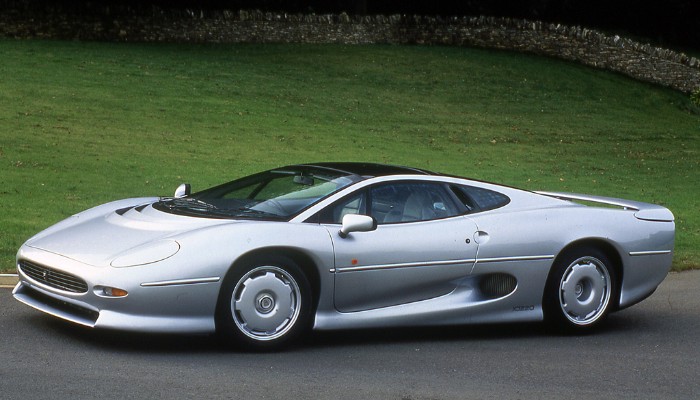 My plan for my life from childhood, into my teen years, was to become a car salesman.

By the way, car salespeople loved when I came in with my Dad.

You see, a lot of car salespeople at the time didn’t know their products well. I’m sure they appreciated when 13 or 14-year-old Jonny would interrupt their attempts at selling a car to my Dad, so that I could tell them that the information that they just told him was…incorrect.

It was simple in my mind; Certain engines and transmissions were not available until you went up to a fancier, more expensive trim level (the SE vs the S, the L vs LX and so on.) It just wasn’t possible in some cases to upgrade the engine size, without getting a whole bunch of options that I knew my Dad would be too frugal to pay for, like leather seats or a CD player.

Once I turned 16 I got my driver’s license which was an easy transition because, like many farm kids, I had been driving long before it was legal.

My first car was a shared car between Carla and myself. A 1986 Suzuki Samurai.

It was a great vehicle. Everyone always complained that Suzuki Samurais were unsafe due to a flipping hazard, but it only went 95 kms/hr with a strong tailwind, so how unsafe could it be?

On one occasion, we were not able to pass our own high school bus going about 85 or 90 kms/hr as the wind wasn’t in our favour. That was embarrassing. All the kids laughed as we eventually had to fall back in behind the bus and follow it all the way to our high school.

The odometer didn’t work so we had no idea how much mileage was on it, but we drove it a lot and it was cheap on gas. I remember more than one time, putting in $2 or $5 in fuel if I had the money. When I didn’t have the money, we would simply tell the gas station attendant that my Dad would be in to pay for it on his way home from work that day.

I’m sure Dad loved when he would pull into the gas station after work, only to be told that one of his kids got $10 in gas and now he owed them. 🙂

My sister once ran over a mailbox and had part of the post lodged up underneath the vehicle. After a mechanical breakdown around the same time, the mechanic noted that he found part of a post lodged under the vehicle. My Dad asked us if we knew what that was all about. I honestly didn’t know anything about it, and my sister…well…she said she didn’t know either.

After the Samurai, I bought a 1991 Hyundai Excel with really cool decals along the side. No radio, no air conditioning, 4-speed manual transmission. It was basically a motor, transmission and wheels, but it did the job. I put in an amazing Sony cassette deck and got a Bass Canon for Christmas that year.

I would drive my friends all over in that thing. When I bought it, it had 40,000kms on it, and 2 years later when I sold it, it had 160,000kms. Many of the kilometres were from my gigantic paper route, which is a story for another time.

And then my first brand new car.

A 1998 Dodge Neon, in Platinum. I had to order the colour as I didn’t particularly want a purple, pink or green car which were popular colours for Dodge Neons at the time. I would wax it often and obsess over the cleanliness of the car. Every squeak or noise meant a trip back to the dealership. It was my baby. I spent WAY too much money on perfecting the sound system including an Alpine CD player, a Boston Acoustics subwoofer, Amplifier, new 6×9 speakers and some tweeters.

Up until that time, cars were important to me, but eventually, the interest faded. They went from being a status symbol at a young age to basic transportation that cost too much to operate.

Since that time I’ve had many other cars, but none more notable than this baby – a 2007 Ford Focus. We bought it brand new in November 2007 for a great price when Joy was working for Ford Credit. Today, she’s not looking as good as she once did, but still running well. I’m talking about the car, not Joy. Joy looks better than ever. 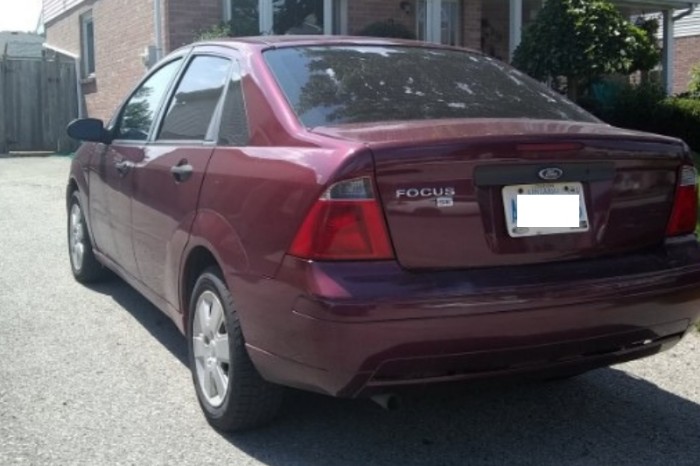 It has a few quirks, squeaks and rattles but we have NOT been gentle with that car. I’ve driven it on trails, down “no winter maintenance” roads – in the winter, through fields and through incredibly deep snow.

I’ve done oil changes every 20,000 kms. Yes, I know that’s LONG over the manufacturers suggested timeframe but I think that whole thing is a hoax. If everyone changed their oil as infrequently as I did, the oil companies would sell 4x less oil. 🙂

Your results may vary so don’t take my word for it, but it’s worked for me for a long time, driving more than one high mileage car.

This car has never had any mechanical issues other than regular wear parts like tires, brakes and bearings. It’s never once broke down in 11 years, except a dead battery which I knew was coming. I had been told for 3 years that the battery was nearing the end of its life. I wanted to test the theory.

It has been the most reliable car I’ve ever owned.

But check out what I got for my 40th birthday! 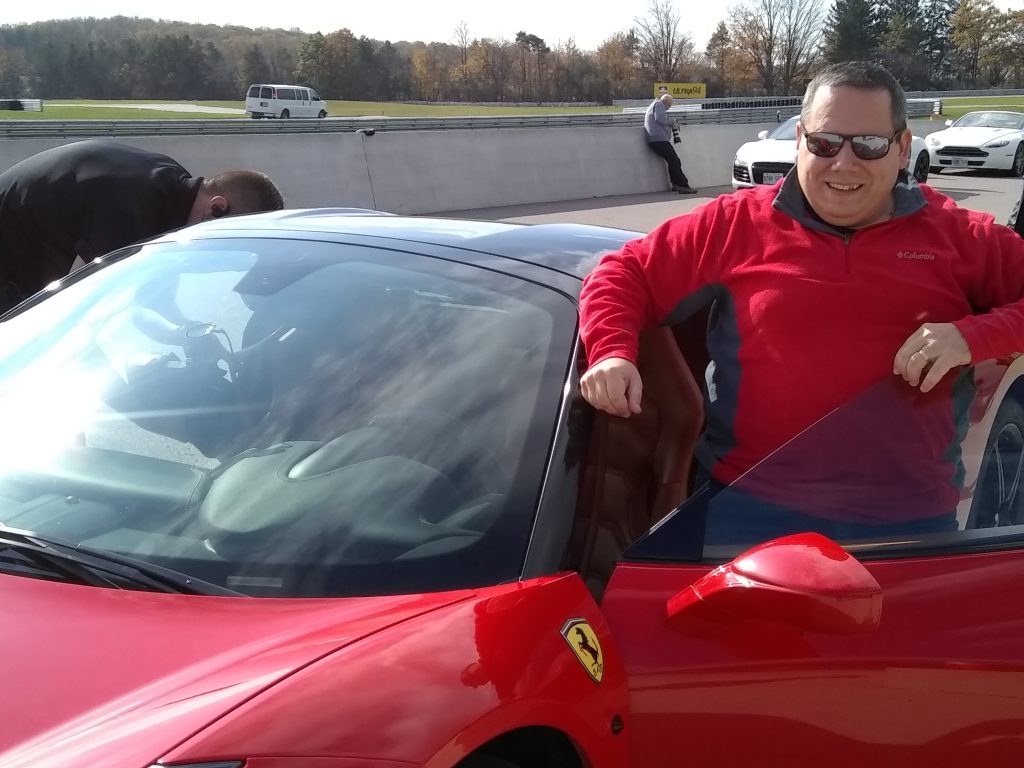 Considering it’s worth quite a bit more than my house, it’s just a little out of my league.

Now, if Joy and I sold everything we owned and moved INTO the Ferrari, with our 3 cats, we “might” be able to swing a payment on it if they let us finance it over 20 years.

Thanks to my family (Wife, Parents, In-Laws, Sister, Brother in Law 1 & Brother in law 2,) I got to drive this Ferarri for 4 laps around a race track with a professional driver beside me.

I’ve never driven a car with that kind of acceleration. The old Ford Focus is peppy, but this thing is a whole different level!

Here’s a little video of me passing by as Joy filmed. It was hard to get going too fast on the track, as there were pylons to zig-zag around on any of the fast straightaways, but that’s OK. It likely prevented me from killing myself.

Driving a car that just turns, when you want it to turn was pretty amazing. You don’t realize how unresponsive a regular car is, until you drive a car like this. You press the pedal and it takes off like a rocket. You brake and it brakes hard. You turn and without any side-to-side sway, it just turns, even when you’re going 70 or 80 Kms/hr.

I was originally slated to drive a Lamborghini Gallardo, but it was out for the day due to mechanical issues, but this was an incredible replacement. Faster, newer, more expensive.

Now I want one. The drive back in our “newer” Ford Focus just didn’t have the same appeal.

This site uses Akismet to reduce spam. Learn how your comment data is processed.