Hobbies and interests; We all have them and for me, it just happens that mine all start with a “C.”

Which reminds me of my sister’s old answering machine message. “You have reached Chris, Carla, Cameron and Carter…”

If you want to strike up an interesting conversation with me, my interests can be summed up in the 4 C’s: Cats, Cars, Coffee & Cruises

I know that I’ve become the butt of many jokes due to my affinity for my feline friends – and that’s OK. I can handle my new identity as the “crazy cat guy.”

From a young age, we had farm cats of which most were feral. I would try desperately to become friends with them, but it just didn’t work – until they had kittens. We would often find kittens in the barn, but sadly most died for one reason or another.

I had this one orange cat that I really liked when I was about 8 or 9, but he died on Valentine’s day. That was a bummer.

Fast forward to a few years ago. My sister Carla sent me a text to let me know that her cat had kittens and she wondered if we wanted one.

Right away I said “SURE!….but Joy won’t go for it”

Strangely, up until this point in Joy’s life, she had NEVER had a pet! How is that possible? No cat, no dog, no hamster…no rabbit. Just a goldfish, which really doesn’t count.

When I ran the idea by Joy, she said: “Absolutely not!”

I started to share my newfound knowledge with Joy in hopes that it would change her mind.

I had become a cat expert…and Joy was thrilled.

Our evening discussions often started with me saying…”Did you know that cats…” to which Joy would reply, “We’re not getting a cat.”

One day during my research period we were in Sarnia, which is not far from where my sister lives. I sent Carla a text message to ask if we could come and visit the kittens.

At this point in time, they were 6 weeks old, which incidentally is the PERFECT time to show off a kitten to a prospective adopter who is having mixed feelings.

We went out to the shed and all the little kittens scattered except this one little orange kitten that sat at Joy’s feet, looking up at her with big eyes. She had never held a cat for any length of time before, so she brought him inside the house and he slept on her lap while we chatted. 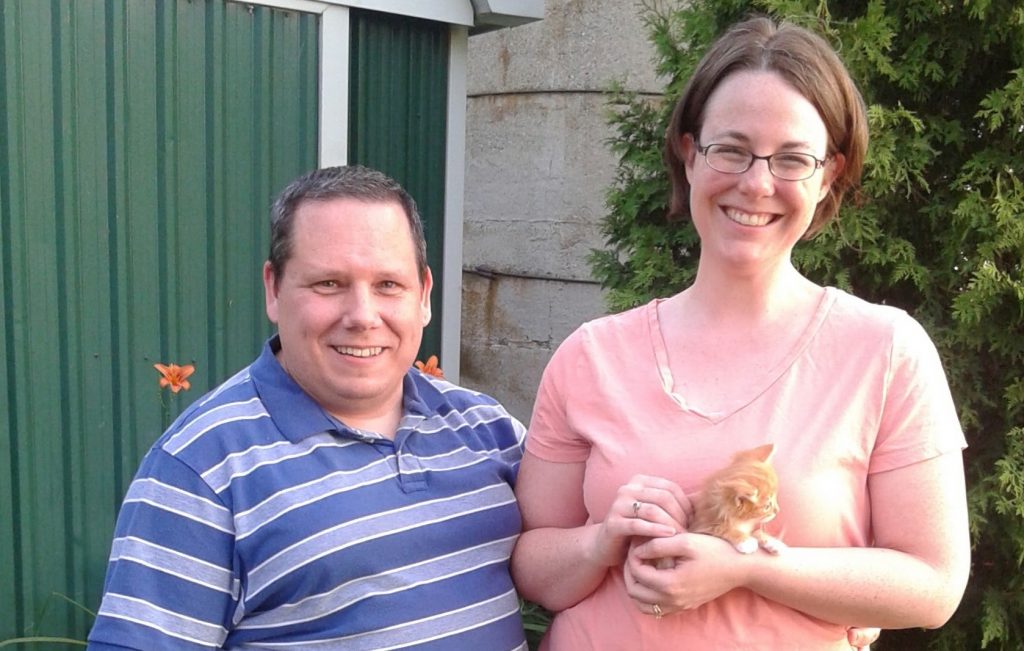 And as it turned out…we were getting a cat! 2 weeks later we picked Franklin up and brought him home.

I’m quite partial to orange cats in general, but I have to say, Franklin is quite a special cat.

You know how some cats are just “there” – taking up space, eating and peeing, but with little personality. Franklin is NOT that cat. He is full of personality – almost puppy-like in many ways. He answers with a trill when called or when he’s playing, loves to be close by when we’re home. He tries not to sleep if we’re around, so he can be where the action is. He likes to sleep touching Joy or leaning up against her legs.

We had Franklin for just one week when we decided that we should get him a playmate. On a trip back to Carla’s house, we picked up another kitten – A black one that we named Molly.

I thought we should get the only black cat in the litter because I had read that there are tons of black cats in shelters and I’m not superstitious. I didn’t want the black cat to get overlooked, just for being black. 🙁 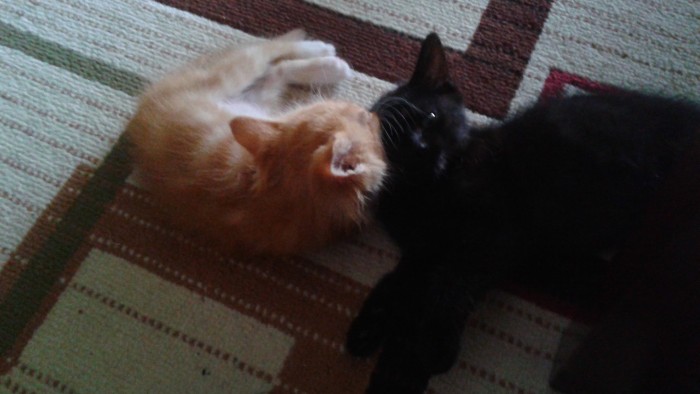 But alas, Molly was a boy, as pointed out by our Vet on the first visit. That was only slightly embarrassing, especially when I told him that I had grown up on a farm. One would think I should be familiar with the anatomy of an animal. Honestly, I just didn’t think to look.

Molly was given a new name: Ollie.

We wanted something phonetically similar so that the transition from Molly to Ollie would be a smooth one. He didn’t seem to notice and responded to that name immediately. He was likely wondering why we had named him Molly to begin with!

Things were going along well with Franklin and Ollie for over 2 years. They had a pretty good life. Premium food, premium litter, plenty of playtime, treats and toys. 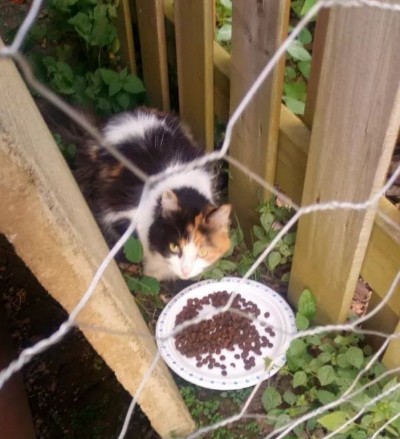 During a supervised visit to the backyard in September of 2017, we noticed Franklin and Ollie both being quite fascinated with the area around our shed. We went over and I thought I could see a little white fur sticking out from under the shed, and whisker. I got down on my knees to get a closer look and determined that it was a cat!

She had burrowed herself under the shed in the corner and appeared to be quite afraid. We coaxed her out some food and water, which she ate vigorously.

For the next few weeks, we would go back to feed her each day, referring to her as “Outdoor Kitty.” At about 5pm each day she seemed to know we would be there to give her some food. She was extremely affectionate, but timid at the same time.

I called Animal Control and told them about her and I posted on all the lost pet websites around London and not a single person came forward to claim her. I asked the animal control folks if I could just keep her if no one came forward and they seemed fine with that idea.

I don’t think the shelter system needs more cats, so they were likely happy to have us take her. London has a no-kill shelter system, so if a cat is in good health and isn’t dangerous, they try to find a home for it, rather than killing it.

One year ago today, we brought Sophie into the house! The weather had started to turn cold and we could tell she was not having a good time outside. Her fur was matted and she seemed to be craving human friendship. She seems quite comfortable today… 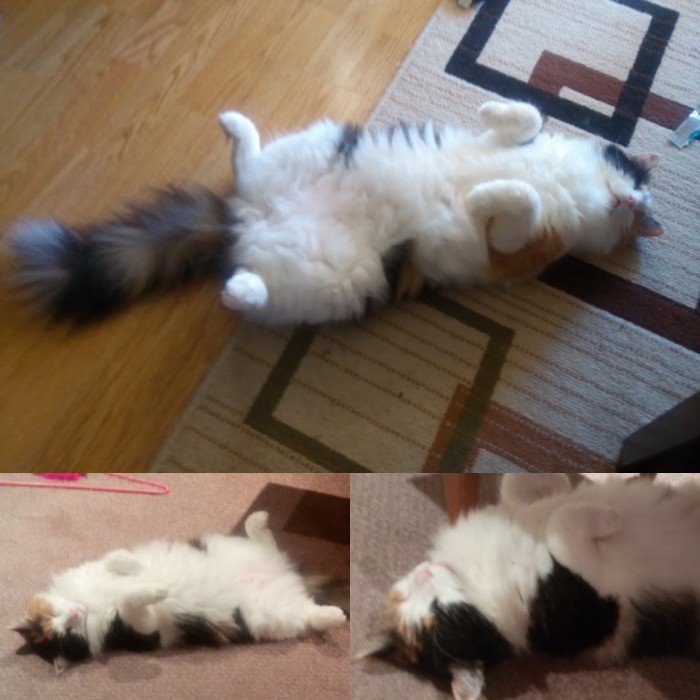 We celebrated her special day by having a visit by the Vet for Ollie. He was not happy!  (And…Yes, we have a Vet that comes to our house. Have you tried packaging up 3 cats? Spoiled cats don’t travel well.)

Sophie and the boys don’t always see eye to eye, but she really is a sweet cat.

And that’s how we ended up with 3 cats.