Today is February 18th, which just happens to be my sisters birthday.

Although I haven’t likely acknowledged it, she was and has been a very important person in my life.

She has never asked for any credit or acknowledgement for what she has done for me and maybe she doesn’t even realize how much of a contribution she’s made to my life.

OR…maybe she does realize it and she’s secretly hoping I will write about her on my blog? 🙂 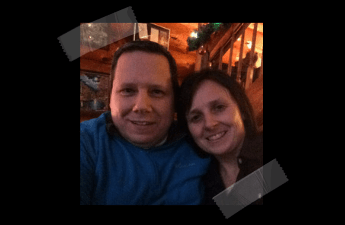 Looking back on it now, siblings of kids with disabilities have a pretty big role. Their #1 role is to be a normal sibling. I’ve heard it said that if you want to know how to treat a person with a disability, you should observe how they’re treated by their siblings.

I think this is accurate – because, at the end of the day, my sister didn’t treat me any differently than she would have treated a sibling without a disability. We had a normal sibling relationship.

We fought. We argued. We tried to get each other in trouble with our parents. I helped cover up for her and never told Mom & Dad about her secret parties when my parents were out.

But at the same time, from a young age, Carla had to assume a few different roles, that she would not have had to if I didn’t have a disability. Because she was 2 years older than me, she likely saw it as “normal” life, because she didn’t know otherwise.

Overall – I think it made her a better person.

Carla: You can thank me later. 🙂

A little bit about her: My sister is my only sibling. She’s married to Chris (since 1998) and has 2 sons, Cameron & Carter – both currently in high school. They live in the old farmhouse that I grew up in, just outside Oil Springs.

The 4 things that come to mind for me when I think back to my younger years are that Carla assumed the roles of Nurse, Bodyguard, Cheerleader and Taxi Driver.

From a young age, my sister was quite involved in my care and development. When I entered Kindergarten, Carla was there for me – taking the role of big sister very seriously.

At the time I had some unique healthcare needs (I will spare you the details) and although she was only 7 or 8 years old, she was on it! She helped me as needed, without complaining. It was a lot of responsibility for a little kid, but she pulled it off well.

When I think about it now, I can’t believe how young she was and yet so capable and willing to help. Who knows – maybe she argued with my Mom about it, and she just lost the argument?

Growing up in the 1980s with a disability wasn’t easy. At the time, no one was talking about bullying or harassment. In fact, it seemed like bullying was the cool thing to do.

Right from the time I entered elementary school, there were bullies. Kids that just had to make fun of other kids who were different, for their own enjoyment.

I am so thankful that Carla was 2 years ahead of me in elementary school. By the time I got to the age where kids started to pick on me, my sister was right there – willing to get a little bit physical if needed.

I remember on more than one occasion, my sister roughing up a kid during recess in an effort to get a bully to stop bothering me. It usually worked. I would assume it’s fairly humiliating for a young man to get roughed up by a tough little girl.

When I got into high school, a few individuals gave me a hard time, so my sister enlisted some of her friends to help the cause. There were a few confrontations and then things cooled down. It was nice having a sister who was athletic and popular to sort out the jerks on my behalf.

Looking back on it – maybe resorting to physical violence wasn’t the best way to get the desired outcome, but it worked – and there wasn’t much else that could be done. Bullying wasn’t taken as seriously as it is today. Teachers seemed OK with the way she was handling the bullies.

One of the things that Carla always did was to support me in my endeavours. Although my interests and hobbies were different than hers, she always supported me. I never felt unsupported in anything I did – whether that was sports when I was about 12 years old, or when I purchased a grocery store after college.

She was there, cheering me on and doing what she could to ensure my success – and sometimes telling me when I was stupid – which is also a helpful form of cheerleading. Sometimes you just need some honesty and there’s only so many people in your life that can tell you when you’re being ridiculous.

Of course, being 2 years older than me meant that she got her drivers license just in time to start driving me around to stuff. I’m sure Mom and Dad appreciated the extra driver. Living out in the country and having another driver in the family to drive me to recreational activities or appointments was handy.

Now that I think about it, we were involved in a lot of stuff that required driving – and we lived 30+ minutes outside Sarnia, where pretty much everything was. Now I know why my Dad worked for an oil company…just putting the paycheck right back into fuel. 🙂

And then she met her future husband, Chris and he joined in on the taxi driving duties. Chris had his own car. A white, late 80’s Grand Am that I thought was pretty cool.

He recently recounted to me how thrilled and excited he was when he would pull in the driveway, ready to take Carla out on a date and her little brother would come out the door right behind her and get in the backseat of his car.

I don’t know how my parents convinced Carla to take me, but I was excited for a nice evening of arcade games or miniature golf at the Wheels Inn in Chatham followed by a burger. Going as the 3rd wheel, when you’re 13 or 14 was pretty fun for me. Thanks, Chris. 🙂

And the list could go on. I don’t often tell her that I appreciate her and everything she’s done, but now it’s out for the whole world to see.

Thanks, Carla. You’re the best!